If you prefer visuals to text, here’s To Frack or Not to Frack condensed into a single image. Consider it an elaborate way of saying: when it comes to the risks and regulation of natural gas development—the politics of fracking—people should be directly involved in the process of deciding what risks are worth taking and for what purposes. When people are put in harm’s way, they should be consulted, directly included in decision-making, and their exposure should be a matter of consent. 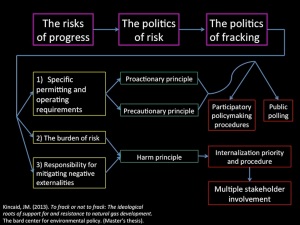 Denton is knee deep in revising its natural gas drilling ordinance. A draft of the revised ordinance was released for public comments on October 2, and I thought y’all might like to read the comment I submitted — it should give you a good picture of what it’s like on the ground down here.

To the Denton City Council:

My name is Jordan Michael Kincaid. I live on S. Carroll Blvd in Denton, TX.

I have two comments regarding the draft of Denton’s natural gas drilling ordinance released on October 2, 2012.

2) The current draft does not accurately reflect the recommendations of the Task Force, nor does it reflect recommendations of the Task Force Minority Report, the EPA Natural Gas STAR program, or the Denton Stakeholder Drilling Advisory Group (DAG). The draft released on October 2 is insufficient to protect public health and safety. I will include 5 specific cases of insufficiency below:

a) Vapor Recovery Units (VRU). The Task Force and the DAG recommended that VRUs be installed at each gas well, but the draft ordinance currently exempts wells emitting up to 137 lbs of VOCs per day, as well as similar numbers for other pollutants including methane. This exemption compromises air quality, public health, and will exacerbate climate change.

e) Closed-loop systems. To avoid the environmental and public health hazards of open waste pits, the DAG recommended that the City ban open pits and require operators to use closed-loop systems when producing natural gas. The Task Force also recommended the use of closed-loop systems. Despite these recommendations, the draft ordinance allows for several kinds of open pits, and stipulates only a “close-loop mud system.” This provision is insufficient to protect public health and the environment from the hazards of production waste.

In sum, I submit to the Council two requests for reasons explained above and summarized below:
1) Please extend the public comment period to 8 weeks and release the draft in both English and Spanish.
2) Please revise the gas drilling ordinance so that it reflects the recommendations of the City appointed Task Force, the citizen-lead Denton Stakeholder Drilling Advisory Group, the Task Force Minority Report, and the EPA Natural Gas STAR Program.

At this point, one can surmise that natural gas drilling is a booming issue. This is especially true on big shale plays like the Barnett shale in North Central Texas. The challenge for municipalities, Denton among them, then, is to regulate this new gas drilling and production activity as best they can.

With this in mind, on February 7, 2012, the Denton City Council placed a 120-day moratorium on new natural gas well permitting applications so that it could revise the city’s gas drilling and production ordinance. In June, with the revisions still incomplete, the Council extended the moratorium ordinance another 120 days, setting it to expire on October 4, 2012.

These exemptions are particularly contentious because they apply to four gas wells owned by EagleRidge Energy – a company known around the Denton community for poor environmental and public health and safety practices. The predominant citizens position represented at last night’s meeting was clear: strong support for extending the moratorium and strong opposition to the redefined exemptions.

But these two provisions of the amendment would either live or die together.

In a unanimous 6-0 vote, the Council passed the amendment to extend the moratorium until December 18, 2012, and redefine the exemptions. Despite being sympathetic to the views of the citizenry, the Council argued that these exemptions better reflect standing state laws of vested rights, which provide that moratoriums of this kind not affect permitting applications retroactively.

This is, I think, an important point – Texas municipalities cannot simply ban fracking, as some might believe. Texas state law prevents moratorium ordinances from having a retrospective effect. In other words, permitting applications already approved or already underway will be valid no matter what new ordinances the City Council passes. The Council’s power stops at halting new permitting applications, meaning old drilling projects are still happening, and after last night’s vote, so too will the four controversial EagleRidge wells.

So, these exemptions better accommodate state regulations, fine. Nevertheless, there’s reason to suspect that other motivating factors were at work in this decision; that is, to not pass the exemptions redefinition would have been very risky for the City Council. EagleRidge has been petitioning for “variance” from the moratorium on the four aforementioned wells for some time now, and if the Council had left the exemptions as they were, EagleRidge has likely been preparing to file a lawsuit against the City of Denton under current state vested rights law and the 5th amendment compensations clause, claiming that the moratorium is causing undue financial harm to the company without just compensation. For this issue to go to trial at all would set a dangerous precedent – one that the Council wants to avoid. So, in order to extend the moratorium, they had to redefine the exemptions. Call it losing a battle to win the war.

In either case, it was a tough spot to be in: the vote was either against extending the moratorium or in favor of the redefined exemptions. Both are politically sticky – painfully ironic, even – putting the Council between a rock and a hard place. But is Denton fracked? Not exactly. The priority is still getting a strong gas-drilling ordinance in place, a goal that remains, I think, entirely reasonable.

See this post also on the Bard CEP blog.