The physics of climate change—the greenhouse effect—are well established. As the Sun blasts the Earth with energy, the Earth absorbs some of it and reflects the rest. Then, depending on surface conditions and the composition of the atmosphere, more or less of the reflected energy makes it back out to space. But if the atmosphere gets in that reflected energy’s way because it’s full of carbon, for example, it gets reflected again back down at the Earth. Since much of that energy is heat, global temperatures go up. Just like an enormous greenhouse. Meanwhile, the Sun is still blasting the Earth with energy and the process continues.

The Earth functions much like an organism. Certain homeostatic processes are physiochemically determined. If the system overheats, symptoms start to develop as the system adjusts to stabilize itself. For humans, we might sweat, feel light-headed, lose consciousness, or worse. For the Earth, landscapes change, ecosystems adapt, weather gets more erratic and intense, land ice melts, the oceans expand, and, in turn, sea level rises.

Climate change means many things—uncertainty among them—but the relationship between global temperature and sea level is straightforward. When the planet cools, sea level drops, and when it warms, sea level rises. This happens for two reasons: 1) the thermal expansion of water and 2) melting land ice.

The former means that as heat diffuses from the atmosphere into the ocean, the volume of the ocean—the literal space between the water molecules—increases. If that’s not intuitive, think of steam rising from boiling pot of water: if you add enough heat to water, the space between the molecules increases so much that they fly apart and into vapor form.

As for the latter, you can probably guess Antarctica’s role.

As Antarctic temperatures rise, the West Antarctic Ice Sheet will continue to melt, the amount of water in the ocean will increase, and sea level will rise. For obvious reasons, any amount of sea level rise poses problems for coastal communities everywhere.

According to the Potsdam Institute for Climate Impact Research and Proceedings of the National Academy of Sciences (PNAS), we can generally predict 2.3 meters of sea level rise for every °C increase in average global temperatures over the next 2000 years, more than a third of which will be attributable to the melting West Antarctic Ice Sheet. By that math, even if the world manages to keep global warming within 2°C (which is doubtful), we can still expect sea levels to rise by nearly 15 feet.

You can click on the map below and zoom in to see for yourself what the world looks like with 15 feet of sea level rise.

In North America, 15 feet of sea level rise would mean cities like New Orleans, Miami, New York, and Boston are flooded, as are sizeable portion of the Yucatan Peninsula and Alaskan coast. Around the world, Bangladesh and the Maldives, large parts of South East Asia, Northern Europe, much of the Amazon Delta, and the northern coast South America would be underwater.

Though I use hypothetical language, it is important to be clear that some degree of sea level rise is now inevitable. Given present atmospheric carbon dioxide levels, the relevant question is not if sea level will rise, but when, and by how much?

To put expectations in perspective, FEMA’s most recent assessment projects sea level rising by more than a meter by 2100. Miami, the Maldives, the southern tip of Vietnam, swaths of Indonesia, and the mouth of the Amazon Delta are flooded with just one meter of sea level rise.

Here’s a world map of 1 meter of inundation for reference.

And it won’t stop then or there.

Atmospheric CO2 concentrations measured in April 2017 logged around 409ppm (updated May 2017). The last time there was this much carbon in the atmosphere was the Pliocene—3 million years ago. The Pliocene was significantly hotter and sea level was more than 20 meters above what it is today. Given the amount of carbon already in the atmosphere, in coming centuries as the Earth’s natural feedbacks to carbon forcing play out, we are likely justified in anticipating something like Pliocene-era sea levels.

Here’s an interactive map tool you can use to check out various amounts of sea level rise.

In the United States, 20 meters of sea level rise means the state of Delaware, California’s bay area all the way to Sacramento, the entire edge of the Gulf Coast (Houston’s port becomes the coast and much of Louisiana goes the way of Atlantis), and the bottom third of the Florida Peninsula are all underwater. Elsewhere in the world: Shanghai, Bangladesh and the Maldives are long since submerged.

But it could be much worse depending on how global climate policy evolves and how the West Antarctic Ice Sheet and other stocks of land ice respond to climate change.

For sake of thought experiment, let’s consider the catastrophic scenarios projected by the IPCC’s A2 and A1F1 emissions pathways, putting us somewhere between 800 and 1000ppm CO2 by 2100. These worst-case scenarios mean that eventually, as Earth systems respond over centuries to come, we reach Eocene conditions—a world entirely without ice. Without ice anywhere on Earth, sea level sat more than 100 meters higher than today. The map tool only displays up to 60 meters of sea level rise, but that should be motivating enough. Just consider it a conservative portrayal of Eocene-era sea levels. BuzzFeed also recently issued some interesting depictions of what the world looks like without ice. 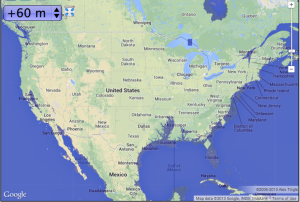 There are good reasons to think that this is bad, or at least undesirable, in and of itself. Maybe we want land ice to exist for its own sake. It might just make us feel better to know that glaciers are out there. Moreover, perhaps we have an obligation not to destroy the natural condition and function of the Antarctic ecosystem, even if not for the ecosystem’s sake but out of respect for Antarctica inhabitants’ right to habitat.

Relevant concerns, to be sure. But the human implications of catastrophic sea level rise are more than disturbing enough to warrant the catastrophic hypothetical. With Eocene era sea levels, cities flood the world over, many coastal countries are submerged entirely, and hundreds of millions of people lose their homes.

Asia with 6m of sea level rise–Map courtesy of geology.com

In the United States, the Gulf and Southeast Coasts are fundamentally reshaped. Florida is completely submerged, the Mississippi Delta consumes all of Louisiana and extends into northern Arkansas and Tennessee, and Georgia and South Carolina lose large stretches of eastern territory. Bangladesh and much of India, vast amounts of Northeastern China, Indonesia, Malaysia, Vietnam, the Philippines, all of Denmark and the Netherlands, as well as much of Northern Germany including Berlin are entirely flooded.

Europe with 60m of SLR

Some nations like the US and China have large amounts of inland territory into which their populations can move (albeit still at huge costs), but many do not. Many people, Bangladeshis for example, will lose their entire country in the catastrophic scenario. This raises several questions.

Bangladesh with 60m of sea level rise–Map courtesy of geology.com

Where should people of entirely submerged nations go? How should responsibility for adaptation assistance be divided? Should neighboring nations take on climate refugees simply because they’re closer, or should nations with greater contributions to climate change or greater ability to pay shoulder more of the responsibility?

The forced migration of countless individuals to new regions within and without their own nations—i.e. population displacement—is perhaps the most obvious ethical dilemma presented by the catastrophic scenario. Bangladesh is commonly considered with regard to the catastrophic sea level rise and population displacement because it is densely populated and especially vulnerable to rising sea level.

Moreover, Bangladesh’s cumulative and annual contributions to climate change inducing greenhouse gases are negligible. Compared to the United States, Europe, India, and China, Bangladesh is not, in large part, complicit in causing climate change, the melting of land ice, or the rise of sea level. That Bangladesh bears little responsibility for causing climate change and its impacts on sea level, yet shoulders the most extreme conceivable consequence is intuitively objectionable by most common conceptions of justice, wrongdoing, rights, and fairness. And if we were to weigh the marginal benefits of industrialization against the resulting change in climate and sea level rise, it would be a strange calculus indeed that rules the prerogative to continue burning fossil fuels over and above the global costs of lost coastal territory and massive population displacement.