Hello fellow humans! I hope you are well. My friend, colleague, and co-author Dr. Alexander Lee and I wrote a short opinion piece, “Re-coupling science and policy”, for the Daily Camera–a local Boulder newspaper–earlier this week.

This short piece is concurrent with the argument in another of our recent articles, “Two problems of climate change: Can we lose the planet but save ourselves?” published in the journal Ethics, Policy, & Environment. There, we argue that the variety of values-based claims central to the climate ethics discussion, from concern with the burdens of harmful climate impacts to the priority of rectifying the wrongdoing of climate change, are given disproportionate emphasis; most emphasis–we think problematically–is put on the harms-dimension of the climate problem, while we believe the latter is closer to the true heart of the immorality and unethical nature of anthropogenic climate change.

In this new short opinion piece, Alex and I consider the recent turns of events concerning The March for Science, Scott Pruitt’s mass-firing of the EPA’s Board of Scientific Counselors, and the general trend of unreasonable decision-making, silencing of scientists, and dismantling of values-discourse altogether in the age of Trump.

Science, as it were, is being de-coupled from the policymaking process. Why the decoupling? Because science, and our reliance on science in making decisions of public import, ultimately reflects the progressive values central to the age of reason, i.e. the value we place on collaboration, fostering open discourse among even and especially those who disagree, the importance of evidence, the approach of objectivity, the testability of hypotheses and reproducibility of methods, and the centrality of cooperation to social, political, and ethical progress; values which, I think rather clearly, the Trump Administration does not share. And thus its leaders have taken significant steps to decouple science from the policymaking and public decision-making process. Yet another sign that the age of reason is dead.

Decoupling science from the policymaking process is yet another move in the Trump Administration’s course to remove representatives of reason from the public discourse; the scheme to silence reasonable public discourse outright. As Alex and I argue, “silencing scientists silences values” — and the open consideration of values is indispensable to the march of progress. As progress in ethics and social order is non-linear, and certainly not guaranteed or immune to regress, we must be tireless in its defense. And to be sure, where science and values discourse alike are squelched by the Trump Administration, it’s not just the age of reasons that’s under siege — it is the very possibility of progress in society.

Let’s get it together, humans.

It’s been a while! Seven months. But spontaneous hiatus can be good. Gives time to explore the wilderness, refocus on what’s important. Here are some shots! 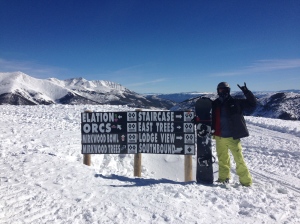 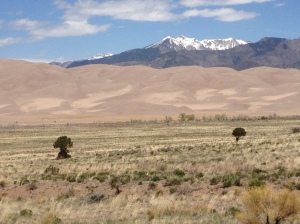 Even though the blog and I were on a break, the sun god has been steadfast. The same sun, everyday, overhead everyone. Unifying us throughout history, across continents and species. But the reason we exist is not our reason for being. The sun does not unify us in meaning or purpose. Meaning and purpose are left for us to work out for ourselves. The world is not a mystic unity. Nor is “humanity.” We are an innumerable diversity; a spectacular tangle of world views and social orders that stretch back 7000 years to the origins of civilization in Sumerian Mesopotamia.

Human history is a cyclical narrative of social growth and decline, ecological feedback, and political upheaval. Modernity is hardly different from ancient Sumer or medieval Europe in that narrative—except in scale, intensity, and speed. We haven’t changed that much. Society has been ravaged with conflict, inequity and ecological degradation since Sumerians started farming around 5000 BC and population took off–eventually acquiescing Malthusian feedbacks. 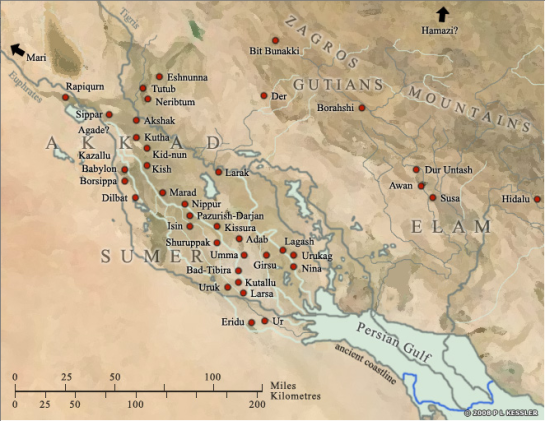 Even then socioecological and political stability was hard to come by in the fertile crescent. Sumerian societies were extremely hierarchical and resource wars between city-states were constant. Eventually the Sumerians fell to the Akkadian Empire, the Akkadians then to the Assyrians, and so began the cycle of regime and revolution. Same story through Bronze Age and Hellenistic Greece; the rise and fall of the Roman Empire; the European Dark Ages and rise of the Islam in the Arabian peninsula, North Africa, and South and Eastern Mediterranean; the Renaissance and Enlightenment; the Industrial Revolution; globalization, and now the centralized military-industrial complex of worldwide neoliberalism. Seven millennia later, civilization is still stuck in the same cycles of social turmoil and ecological feedback as Sumer. The cycle of regime and revolution rolls on like a pumpjack. Social inequity and ecological degradation abound.

Except now we do it global.

Ecuadorian Amazon after ChevronTexaco development—courtesy of Chevron In Ecuador

Global capitalism and the centralization of power and wealth in international neoliberal regimes, large States, and multi-national corporations are truly remarkable. We enjoy technology and material resource wealth in industrialized countries unlike anything the world’s ever seen. But it comes at cost of exacerbating historic social inequities, military conflict, and ecological degradation the enormity of which can’t be overemphasized. This is the so-referred “socioecological crisis.”

Unsustainable and inequitable material resource consumption is central to the socioecological crisis.

Global material resource consumption has increased eight-fold in the past century, skyrocketing after World War II. We surpassed the Earth’s biocapacity (the amount of material resources we can sustainably consume) in the mid-70s, and now, consuming more than 60 billion tons/year, it would take more than 1.6 Earths to sustain our habit. It’s no surprise that large central powers clash over control of the world’s resources.

But we are a great diversity. People aren’t uniformly responsible for unsustainable overconsumption. And really, while we are each responsible for what we consume, inequitable unsustainable overconsumption is a systemic problem–it’s the doing of large central States, multinational corporations, and international regimes all with neoliberal economic motivations. Global capitalism has created material resource inequity unlike any in history.

Consuming more than ever in advanced industrial societies, billions around the world in subsistence economies still struggle to meet their existential needs.

A great few consume too much. Or rather, too many consume too much while too many consume too little. The ecological crisis is fundamentally a social crisis—a crisis of consumption. Really, overconsumption. But not straightforwardly so. It’s an inequitable overconsumption. A stark minority of wealthy people consume far more than is reasonable—than is fair—while far too many are left in want. Most ecological problems are symptomatic of inequitable social organization, irresponsible central governments, multi-national corporate resource privatization, the systemic oppression of coerced overconsumption in advanced industrial societies, and the procedural disenfranchisement of the poorest in the world often most vulnerable to ecological decline—we must, in turn, equitize in order to ecologize society.

Modernization. Industrialization. Centralization. Globalization. Development. Consumption. This has been Western civilization’s mantra since the Enlightenment, our recipe for wellbeing, for the Good Life—the heralds of modernity: that we are destined to overcome the poverties of the human condition through cumulative advances in science, technology, and the liberalization of central government and the global market; that we will be more free and endlessly better off for our complicity in an socioeconomic model of limitless consumption. Through industrial development and the expansion of “free” trade (as governed by a handful of impenetrable central authorities), neoliberals promise the world a secular deliverance from scarcity and oppression. Free markets make for rich, free people. Or so the story goes.

Instead of spectacular emancipation, global capitalism has exacerbated historical oppressions. Race, gender, and income inequities persist worldwide and ecological degradation perennially associated with human habitation has rapidly intensified since the Industrial Revolution. Three centuries after the great social and political liberalization of the Enlightenment, international neoliberal elites have institutionalized a scaled-up version of medieval European feudalism. The Earth’s resources, the land, the Earth itself, have been parceled and purchased—now “owned”—by a handful of powerful States, international governing regimes, and multi-national corporations—exploitation and commoditization their agenda. For most of us—we serfs—we own little and decide even less. But still too many consume too much while too many consume too little.

Paradoxically, despite enabling unprecedented and unsustainable material resource consumption in advanced industrial societies, people of subsistence economies the world over still struggle to meet their non-contingent needs—all amidst accelerating ecological decline. And usually it’s women and the especially impoverished in subsistence economies who shoulder social inequities and ecological degradation.

But that’s not to say advanced industrial societies are internally equitable themselves. Racial, gender, and income inequities persist throughout “modern” countries as well. Too often women are disenfranchised by social and cultural norms laden with sexism. Too often the poor and racial minorities in the developed world bear the ecological risks and harms of industrial land-use without inclusion in the decision to industrialize, informed consent or fair compensation. Local decisions are made instead from far away by iron triangles of feudal lords: corporate executives, purchased career politicians, and a revolving door of pretentious technocrats in opaque bureaucracies—the inevitable dehumanizing machinations of hyper-centralized government and the privatization of the planet.

Perpetual growth, production, consumption, profit, and power are the agenda of the already powerful, not the vast majority of people. Most of us just want to live fulfilling, meaningful lives—to feel a sense of place, purpose, and existential validation—but have been deluded into mistaking material consumption for human wellbeing by those with an interest in selling it to us.

Consumption is not wellbeing. Existential consumption is obviously essential to basic wellbeing, but marginal returns on material consumption quickly diminish and eventually the consumptive cycle becomes futile and vicious. In many cases—especially in advanced industrial societies—we would live better for living with less. Or rather, we could consume less and still manage to be better off. Wellbeing is only a matter of consumption to a point. Once existential needs are met, living well really means resilient and enriching interpersonal and socioecological relationships: living in a community of social and ecological complementarity, free self-expression, fair distribution of resources and burdens, and equitable direct democratic involvement in political and economic decision-making.

But this diverges radically from everything we’ve been told by our neoclassical and neoliberal politico-economic overlords—they who would have we peasants remain complicit in an unsustainable global system of social organization that has left more than a billion people in destitution, disenfranchised all but the super-wealthy and well-positioned elite, and caused the worst ecological decline since the start of the Holocene.

It’s the same old story really. 7000 years after the birth of civilization we’re still spinning in the same circles as the Sumerians. Constant geopolitical conflict, cycles of regime instability, distributive and participatory social inequities, struggle with natural feedbacks to ecological exploitation—not much changes. Like Sisyphus we are bound to forever push our boulder up the mountain. We are creatures of habit.

But that’s not to say we should resign to nihilism. We must imagine Sisyphus happy and take responsibility for our boulder!

Predictable as the human cycle may be from 40,000 feet, we have local and interpersonal opportunities to find meaning and purpose in socioecological relationships on the ground—in connecting with the people and land around us. We might find that we live better and more sustainably for doing so.

And as long as we’re here, so too will be the sun. Ecosystems change, regimes rise and fall, but the sun is always overhead. Uniting us. Unifying us. Throughout history and across continents and species. We are a vast diversity of world views and societies, but the sun we have in common.

Sunset over the Continental Divide seen from Green Mtn